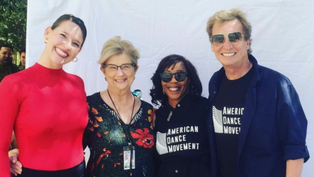 Amanda Cobb; Judy Moore of Segerstrom Center; Renae Williams Niles, Associate Dean, USC Kaufman School of Dance; and Nigel Lythgoe, Co-Founder of American Dance Movement
Ms. Cobb began as a gymnast under Yoichi Tomita, a USA Gymnastics Hall of Fame member, winning numerous state championships on floor and beam routines, and went to the Junior Olympics in 1992. This foundation gave her the strength and discipline that have been a major element in the success and dedication she has demonstrated in every aspect of her life. ​​ 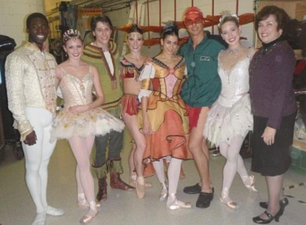 ​​Principal roles included Partisan Woman in Jooss's Green Table (ABT), Leto in Balanchine's Apollo (ABT), Kick Girl in George Balanchine's  Rubies (Washington Ballet), Choleric in Balanchine’s The Four Temperaments (Washington Ballet), Tiger Lily in Peter Pan (Washington Ballet), ​Brown Couple in Lila York's Celts (Washington Ballet), Queen in Swan Lake (ABT), Juliet in Jörgen’s Romeo and Juliet (Ohio Ballet), and The Chosen One in Aiello’s Rite of Spring (Ohio Ballet).
Ms. Cobb, designated a Certified Teacher by ABT in 2015, has taught the highest levels at the American Ballet Theatre William  J. Gillespie School for the past seven years, teaches the ABT California summer intensive ages 12-18 and California ABT Young Dancer ages 9-12 summer intensive, and is also on the faculties for PACE University's Commercial Dance department and  Orange County School of the Arts Classical Conservatory. Additionally, she is certified in Pilates and GYROTONIC® and is a gifted choreographer.

Ms. Cobb has been fortunate to have had an outstanding performing career and she is just as fortunate to have the privilege of teaching others, sharing her passion and knowledge, guiding students to become their best selves, and providing training that impacts their lives, no matter what they choose to do.

And so the natural progression was from performing to teaching and now to direction. Her ability to work well with others lends itself perfectly to finding the best teachers and guest teachers to further her vision, and to bringing out the best in all she works with. And vision is one thing Ms. Cobb has always had in spades.

In 2020, Ms. Cobb conceived and directed the successful Dance Compañía online summer intensives, assisted by ABT soloist, Luciana Paris, and Jonatan Luján. Students from all over the world participated in Zoom classes taught by international ballet luminaries. Each of the three weeks culminated in a student performance gala, with the third week highlighted by a spectacular original piece set on the students by choreographer/ABT soloist, Zhong-Jing Fang.